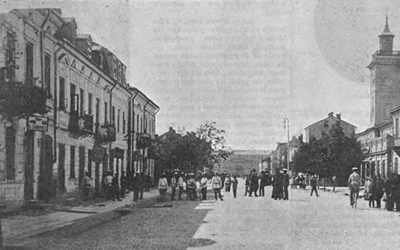 Siedlce pogrom refers to the events of September 8–10 or 11, 1906, in Siedlce, Poland, organized by the Russian secret police. There were 26 fatalities among the Jewish populations.

Siedlce pogrom refers to the events of September 8–10 or 11, 1906, in Siedlce, (Congress) Kingdom of Poland. It was part of a wave of pogroms in Russia and controlled territories (such as the Kingdom of Poland), in the larger context of the widespread unrest. The pogrom in Siedlce was organized by the Russian secret police (Okhrana). There were 26 fatalities among the Jewish populations.

Siedlce had a significant Jewish population (estimated at 10,000 to 64% out of 24,000 total (so about 15,000)). In the larger context of the widespread unrest it was the site of socialist and Polish patriotic agitation and demonstrations  and the government desired to make a vivid response to the Bloody Wednesday, a series of attacks on government officials organized by PPS that took place barely a months earlier, and other similar events. On August 26 an OB PPS activist, disguised as a Jew, assassinated a Russian police captain in Siedlce. As many Jews took part in the protests, the Russian government saw the Siedlce as a ripe territory to show its force.

The pogrom, planned systemically "for some time", took place on September 7 or 8 to 9,10 or 11, 1906. It was organized by the Russian secret police (Okhrana), in particular by Colonel Tichonowski, who was tasked with the preparations. Anti-semitic pamphlets had been distributed for over a week and before any unrest begun, a curfew was declared.

The primary perpetrators were Russian soldiers from the Liep?ja (libawski) infantry regiment. They had replaced the Ostro??ka garrison, previously garrisoning the town, which had been deemed too sympathetic to the local residents. The soldiers were ordered to start shooting on the town square; soon afterwards, they were ordered to set some fires, and allowed to loot Jewish stores at will. Artillery pieces were used, as noted even in the official news reports. Some sources also report the involvement of Black Hundreds, which had no native presence in the Kingdom of Poland, and would have had to have been brought in by the authorities from the Empire proper. Most of the shops in the town were destroyed and looted, and there were many cases of arson; private Jewish homes were also broken into and looted. Official military reinforcements from nearby garrisons were moved to Siedlce. In the meantime, Russian officials were demanding from the Jewish community that the "bandits" who had opened fire on the soldiers be turned in.

There were 26 fatalities among the Jewish population, and an unspecified, larger number, into the hundreds, were reported as injured. The Polish populace helped to shelter the Jews.